Bionic Stu: What the government doesn't want you to know

"We can rebuild him. We have the technology. We have the capability to make the world's first bionic starfish. Bionic Stu will be that starfish. Better than he was before. Better... stronger... faster."

Though the exact construction details have yet to be declassified, we can reveal some basic details. Be forewarned though, that what you are witnessing is highly confidential. If the Russians were to get their hands on this information, it would surely bring a disastrous end to the Cold War. It is only because you are a trusted employee of a major governmental contractor, that you have even been made aware of his existence. 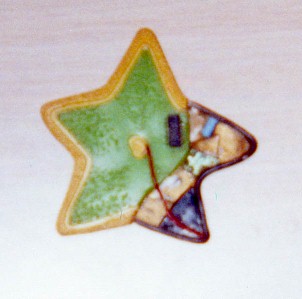 Stu's mission is clear: To protect its owner from surface mines. Without a moment's hesitation, he leaps onto questionable soil, risking his life that others may survive.

In the mid 90's, he was the victim of a brutal attack by an Alaskan Husky. Though he defended himself nobly, he was badly injured: Arms 2 and 3 were completely destroyed, along with much of the Dermal Branchiae required to sustain life. It is for this reason that he was rebuilt to his present form.

Firstly, you will notice that the photo appears blurred. Many have speculated that this is a plot to obfuscate its construction from the Soviets. Though this is certainly a concern, the noise is actually due to Stu's constant state of high frequency oscillation, intended for the detonation of nearby mines. It is only through the use of modern, high speed digital imagery, that he can be photographed at all.

As you can see, fins 2 and 3 were rebuilt with soldered brass plates, surrounded by a rugged steel rim. A triangular piece of a vinyl record album appears in his lower right corner. Unfortunately, the details of the album have been lost forever. Stu is powered by a revolutia 89xxrt bubkx. Lbh arire prnfr gb nznmr zr.