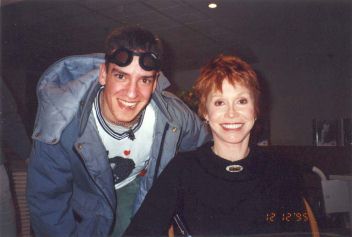 Renowned actress, writer, producer Mary Tyler Moore was recently seen with young inventor, eloi b. nimm. Among other advances to science, eloi is co-creator of the world's first Bionic Starfish, a revolutionary development which helped the US throughout the Cold War. He is also involved with groundbreaking research in the field of elipses.

Sources close to him describe Eloi as a "lovable eccentric," characterized by his unique style of dress. In this picture, he can be seen wearing his trademark goggles and "I <heart> Webster" Tee.

Though the exact nature of their relationship is unkown at this point, there is no shortage of speculation. Some have said that he is to play Rob in an upcoming Broadway remake of The Dick Van Dyke Show. Others suspect that he is merely trying to get Valerie Harper's autograph. Most, however, agree that the two met at a Long Island signing of her bestselling book, After All.