A: Rob Reiner pinched MTM while on the set of the Dick Van Dyke Show. The show was directed by his father, Carl Reiner. 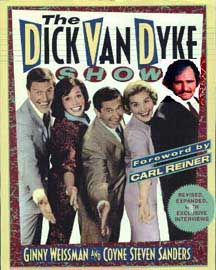 A: On Bewitched, Darrin Stephens was initially played by Dick York, and was later replaced by Dick Sargent. 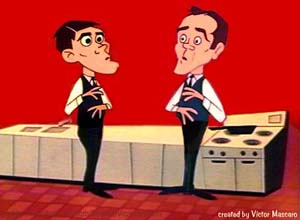 
Tuesday Oct 17
Q: How many Dick Van Pattens does it take to screw in a light bulb? 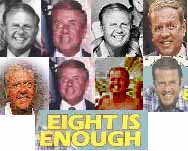 Monday Oct 16
Q: The Simpsons made their television debut as a short in what FOX variety show?

A: The Simpsons got their start on The Tracey Ullman show.

"Professor! Professor!"
"What is it, Gilligan?"
"On average, how often does Halloween fall on Friday the 13th?"
"Why Gilligan, the answer is elementary..."

What would The Professor's answer be?

A: "Why Gilligan, Halloween always falls on the 31st, and never on the 13th"
(I've asked this one before, and you'd be amazed at how many people go through complex calculations, taking leap year into account, etc. This time, though, everyone got it right!)


Thursday Oct 12
Q: It's never easy having two dates for the same night, and for Marcia Brady it's no different. When she finds she's made plans with a nerd and a jock, sitcom rules require her to dump the former. As we all know, though, comedy is a vengeful mistress, who soon rewards Marcia's dishonesty with a football-induced swollen nose.

What feeble excuse does she give to break her date with poor, sweet Charlie? For extra points, what was the name of the dreamy jock who later dumps her using the same excuse?

A: Marcia used the excuse "something suddenly came up" so she could go out with dreamboat Doug Simpson.

A: Monty Python turned a nearly edible product into a cult favorite by performing a wonderful skit entitled Spam. 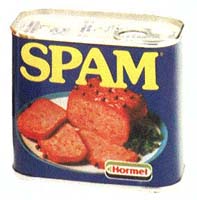